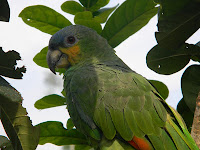 It has been over ten years since the Beehive Design Collective first went to Putumayo during its research trip to create the graphic about Plan Colombia. Not much has changed since then, and unfortunately the presence of aerial fumigations over indigenous communities in the Colombian Amazon as well as oil extraction within their territories has only increased since the making of this graphic.

Polinizaciones accompanied the Escuela of Comunicación Propia del Putumayo in the Lower Bota Caucana to document different issues in the region. First were the activities of Canadian oil companies like Gran Tierra´s operation of different wells in the Costayaco, Guayuyaco and Moqueta petroleum blocs and Pacific Rubiales in the Teracay and Tacacho blocs. All of these installations are connected to pollution and have a negative impact on the forests and rivers of Caqueta, the Bota Caucana and Putumayo.   In addition to the problems caused by oil companies, Polinizaciones documented aerial fumigations, part of Plan Colombia, which only result in displacement and making people sick. Construction of the marginal forest highway (part of the South America Regional Infrastructure Integration (IIRSA) project) and its role in facilitating the extraction of oil, gold, and other resources, was also documented. 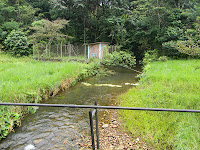 The territory within the limits of the Churumbelos Mountains holds the headwaters of numerous Amazonian rivers such as el Congor, el Tambor, El Fragua, El fraguita, and many others that will all be privatized by the creation of the Auca Wasi National Park. This is done under the pretense of “sustainable development” as part of the selling of “environmental services” (oxygen and biopiracy) in alignment with pro-business politics and the unworthy track record of major multinational organizations such as the WWF, USAID, and the World Bank. Meanwhile, the territory will continue to be destroyed through oil and mineral extraction as part of the geopolitics of the privatization of the Amazon that the State puts into effect by militarizing the territory with the army, resulting in violence and displacement.

This territory is inhabited by the Inga people and more recently the Nasa and Awá peoples, as well a growing colono population that is the major culprit in deforestation for mining and cultivation of mono-crops such as rice and coca, as well as cattle ranching. As expressed by local inhabitants, these communities are threatened by displacement and their future depends on future generation´s ability to maintain their communities organized and able to stand against mega-development projects and national parks. 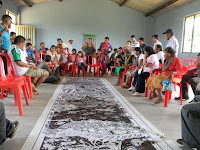 Ancestrally this is the territory of the so called Andakí Peoples of which some people in the region have grandparents and relatives that were kidnapped from these communities. For the most part, the kidnapped have not been seen in over 80 years. Being in the region, we had the privilege of seeing petroglyphs in the upper part of the Congor River that were very similar to those in La Jagua, Huila. We made the connection that it is quite possible that the headwaters of the Fragua River are the same headwaters of the Suaza River that joins the Magdalena River in the area of La Jagua. 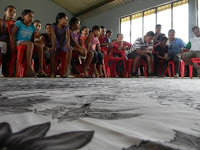 On this tour we were able to witness how State policies of militarization and extraction go hand and hand with the destruction of the environment due to the contamination caused by extractive industries and the breaking of the social fabric of the communities that live on contaminated lands and are no longer able to live as they have before. All of the extraction projects use the Colombian military as part of their security and any opposition from local communities is done under the constant threat of violence. The result is that these communities are forced to be impoverished and polluted, and any misstep can result in displacement from the territory or death. 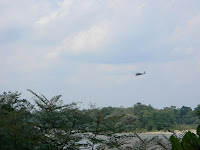 This is just the territory that is in need of being able to share and appropriate graphics such as the Plan Colombia and True Cost of Coal banners into the local communities. We were able to take the story of Plan Colombia and extractivism to the communities and territories that helped forge and weave the Plan Colombia graphic over ten years ago, and that today continue to value and need it as an important tool for raising consciousness. It’s worth mentioning the surreal nature of presenting the Plan Colombia graphic to a large group of people while various Blackhawk helicopters flew overhead at the exact moment that we talked about militarization as a way of reinforcing the everyday reality that is the Colombian Amazon.