Movement for the Defense of the Territory and Against Quimbo Dam Vows to Grow Stronger, Despite Diverting of the River

“This is not done here, we will continue to fight, but this feels worse than when the humans destroy the tree in the movie AVATAR,” lamented Luisa Aguas, from the local community organization Comunidad. 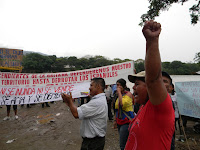 On March 3 at approximately 5:37pm, Emgesa, affiliate of Spanish-Italian Energy Giant Enel-Endesa, announced that they had successfully begun the diverting of the Guacahayo-Yuma-Magdalena River from its natural course as part of the construction of the Quimbo Hydroelectric Project in Huila, Colombia. Project Manager Julio Santafé told local press that late Sunday the remaining rocks and dirt will be excavated from the tunnel where the river will be diverted through to enable the next phase of the project of building the dam. The complete diverting of the river should be completed by Monday.

“The diverting of the River will only make us stronger and will for sure, lead to the death of Emgesa” said Miller Dussan, ASOQUIMBO Investigator and Professor of the South Colombian University, next to the highway during the meeting. 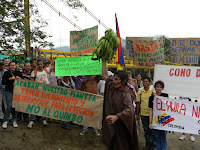 Dussan shared that “Senate Vice-President Alexander Lopez has already released his questionnaire investigating the Minister of the Interior, German Vargas Lleras, for claiming he could not do anything about the violent removals on the [Feb.] 14th and 15th when later the Mayor of Paicol informed that he was pressured to do so by Vargas Lleras. Vargas Lleras brother is José Antonio Vargas Lleras who is the director of CODENSA the Colombian affiliate that owns and operates Endesa affiliates Bogotá Electrical Company and Emgesa.

After being pushed back over a month from protests and strikes held by affected local populations by the dam, Saturday's diverting was programmed for the morning. However, multiple direct actions in the area of the construction delayed the diverting to the late afternoon. Nearly 500 hundred campesinos, indigenous, students and youth faced off with riot police at the construction sites entrance near the damaged Paso del Colegio Bridge closing off traffic to the entrance of the site, eventually marching to the national highway. 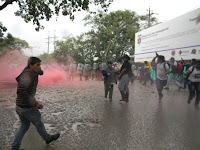 At the same time around 90 fisher-people up river of the dam site occupied the tunnel and surrounding beaches until they were apprehended and detained for some time before being released. The group that marched to the highway held a meeting and blockade until the end of the day and there is currently still an encampment of fisher-people up river of the site. Throughout the day internet cyber-activist Anonymous, as part of #OpQuimbo, was blocking the website for the Ministry of Mines, Emgesa and the Huila regional government.
Saturday's actions were part of a series of protests and direct actions called for by the Association of the Affected of the Quimbo Hydroelectric Project –ASOQUIMBO that have been happening globally over the last week. In Huila the towns of Gigante, Garzón, La Plata and regional capitol Neiva, has seen thousands of grade-school students and youth take to the streets in marches paralyzing those urban centers.

On national level solidarity actions in Bogotá, Cali, Pereira, Mocoa, and Medellin have taken place with calls to “flood the Ministry of Environment”. Internationally the support has come over the last week from protests or visits at Colombian Embassies in Miami, Washington DC & New York City, United States; Buenos Aires, Argentina and in London, UK. This next week there are more actions planned for Barcelona, Spain and second protest planned in Rome, Italy at the Enel Offices. All the actions have been in solidarity with the people of Huila and calling for a suspension of the Quimbo Dam and an end to the State violence used against protesters.
Since the violent removals of protesters from the bank of the river in Domingo Arias, Paicol on February 14 and 15, President Santos has publicly claimed that riot police used completely “normal procedures” and made no mention of the 7 people wounded, including one person who lost his right eye. He also stated that the “progress of the country would not be held back by personal interests”. 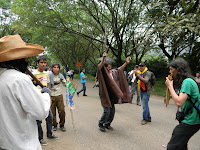 During the day´s actions President Santos told media that the protests are “infiltrated by guerrillas” and “people not from the area”.
This comes a day after that President Santos receives the Hero of Environmental Conservation Award in Cartagena, presented to him by pro-business environmental organization Conservation International (CI). CI is best known for helping environmentally destructive corporations green-wash their image, while also being accused by indigenous communities of acts of biopiracy. Last week the new ranking for the 2012 Environmental Performance Index (EPI) of the world´s countries was released by Yale University and Colombia had dropped 17 spots (EPI).
During Saturday´s mobilization the Minister of Mines and Energy, Mauricio Cárdenas, told national media, that three of the country's major hydroelectric projects—Ituango in Antioquia, Amoyá in Tolima and the Quimbo—were all being threatened with “sabotage” by political and armed forces opposed to the projects.
On a continental level, these mobilizations against hydroelectric projects have increased in recent months throughout South and Central America. 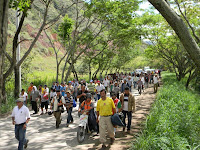 Just last month protesters of the Ngobe-Buglé people were brutalized and left two people dead in protests in Panamá against mining and a planned Dam and the conflicts with Brazil´s mega dams in the Amazon Basin such as Belo Monte are on-going. In addition to the Quimbo Dam, Endesa is also damming rivers and creating multiple conflicts within Mapuche Territory along the Bio Bio River in Southern Chile and along the Chixoy River in Mayan Territory of Guatemala.

Also Saturday, the Attorney General and the Ombudsman´s Office announced that starting next week prosecutors from the Environmental Crimes and Anti-Corruption Unit will be opening an investigation to look into possible irregularities with the U$334 million contract that the Colombian government signed with companies Emgesa and Impregilo for the Quimbo Hydroelectric Project .

The prosecutors will also look into allegations of environmental destruction, forced displacement and threats to local inhabitants. In the evening further south in the municipality of Timaná, approximately 60 milometers from the Quimbo site and the site of a future dam Emgesa hopes to build in Huila in the Pericongo Canyon, an earthquake hit the area with a rating of 3.5 on the Richter scale.
This week a statement is expected from the Comptroller's Office regarding an on-going investigation since January of irregularities in the company's census, compensation and resettlement of the affected population.
More marches are expected regionally and internationally on Tuesday, March 6 and ASOQUIMBO is maintaining its call for solidarity direct actions. Regionally the communities in resistance prepare for the next steps in the struggle for the defense of the Upper Guacahayo-Yuma-Magdalena River Valley. 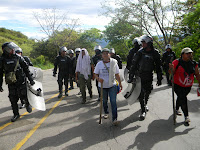 While riding in the back of a truck in the rain leaving the site of the day´s actions, unemployed day laborer and part time fisher-woman Ximena Chavarro shared that “The State is leaving us very few options. It is disregarding and abusing its own laws and due process that protect us the inhabitants, our territory and the river which is everyone’s all to be able to secure Uribe´s 'investor confidence'. Right now we all feel so violated and furious that we understand why others in similar situations resort to violence even though we have never wanted to go there.”
Publicado por .melipona en 0:50